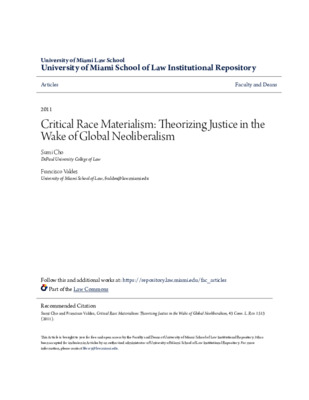 By Sumi Cho and Francisco Valdes

Critical Race Theory\u27s (CRT\u27s) first two decades produced a rich and diverse literature deconstructing law and society using a racial lens. CRT\u27s emergence and rise occurred at a moment in history where the U.S. was still the uncontested unipolar superpower whose privileged elites enjoyed unprecedented prosperity and status. Despite its dominant standing in the world economy and polity, prevailing social structures of accumulation within the United States were already in decline. For CRT\u27s next iteration, we argue that a critical race materialist approach is necessary to interpret the history of how economic and social structures of identity are inextricably linked. We believe such a turn is necessary due to two relatively new developments taking shape at the sunset of the twentieth and dawn of the twenty-first centuries-the end of the golden era reign of the U.S. as the world\u27s hyperpower and the advent of global neoliberalism as the newest social structure of accumulation. We consider the role of critical race materialism in a historical moment of acute, persistent, and even growing, structural and identitarian inequalities operationalized at both the micro and macro levels of society through legal colorblindness, political post-racialism, globalized neoliberalism, and their variegated interactions. This Article offers critical race materialism as an approach to guide the uncompleted project of racial and social justice. By adopting this term, we mean to capture and underscore the dynamic, multifaceted yet tightly collusive relationship between cultural and material exercises of legalized power to govern human lives, fortunes and destinies based on identitarian constructs like race, class, gender, or sexuality