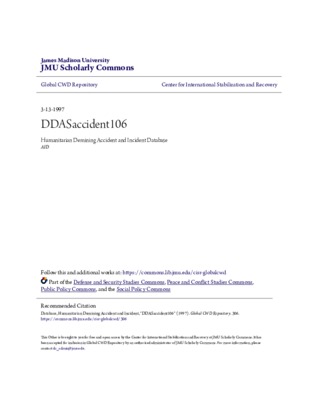 By Humanitarian Demining Accident and Incident Database
Get PDF (152 KB)

The investigators determined that the victim was clearing inside a collapsed building. The mines were probably laid on the roof, which had fallen in, so may have been in any position in the ground. The mine was identified as a PMN-2 (from found fragments ). The victim\u27s visor shattered and a photograph showed jagged fractures and little evidence of blast impact. [This damage implies a twisting force on a brittle plastic, indicating that the visor was probably raised, so explaining the facial injuries.] The deminer\u27s pick was also damaged