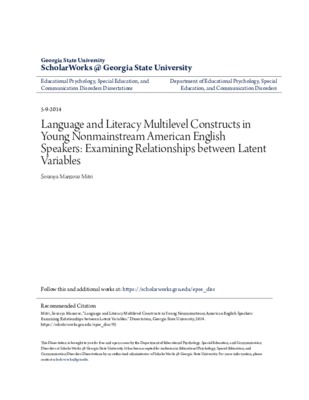 According to the National Assessment of Education Progress (NAEP, 2013), children from race and language minority groups continue to perform significantly lower than their peers on reading achievement tests. Current perspectives suggest that multiple factors (e.g., household income, parent education) likely contribute to the achievement gap between African American children and their White peers and children from low income and middle income households (Barton & Coley, 2010; Chatterji, 2006; Jencks & Phillips, 1998), leading to multiple approaches (e.g., Head Start Early Reading First) to prevent or alleviate the trend (Barnett, Coralon, Fitzgerald, & Squires, 2011). However, African American children continue to perform lower than their White peers, and continue to be over-represented in special services. It has become increasingly important to understand the contributors to early reading development among African American children. The purpose of this study was to provide a descriptive view of early language and literacy among typically developing children in prekindergarten who speak nonmainstream American English at child and classroom levels. Approximately 673 typically developing children in 95 prekindergarten classrooms were included in this study from a larger cross-sectional study. Results support a model with language, literacy, and dialect as separate constructs at the child level while language and literacy as one construct and dialect as the second construct at the classroom level. Language and literacy were highly related but distinct at the child level but perfectly correlated at the classroom level. The dialect construct was moderately and negatively related to language and literacy at both levels