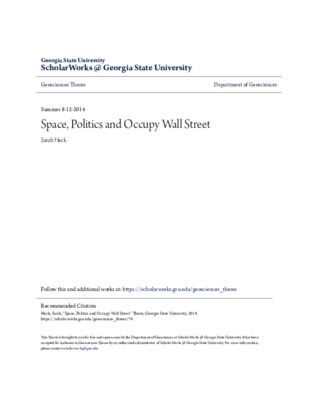 In September of 2011 Zuccotti Park, located in the heart of downtown Manhattan, became a site of political contestation when several hundred activists pitched their tents, set up their signs, and began to occupy the park, in what later became known as Occupy Wall Street. Occupy Wall Street became part of the larger Occupy moment, in which public parks in most major cities and college towns across the nation were occupied for several months by protestors contesting a range of issues including the growing disparity in wealth, corporate influence on democracy, and deepening social injustices. By the end of 2011 the nationwide eviction of most Occupy encampments resulted in the assumed failure of Occupy to challenge successfully contemporary politics and to organize a clear list of demands. In this thesis, I draw on ethnographic material collected in 2012 to interpret the spatial strategies and spatialities of Occupy and argue that for Occupy, this lack of focus is a strength in that it creates a space for alternative political discussions and practices otherwise less visible or nonexistent in the current political system. I examine the spatialities of Occupy, by which I mean the networks, mobilities, and places of Occupy, and argue that such an analysis offers an entry point in which to consider the ways in which space and politics are co-produced. In order to examine the relations between space and politics, I locate the specific spatial practices and strategies utilized by participants both in the highly visible occupation of public parks and direct actions and less visible organization spaces