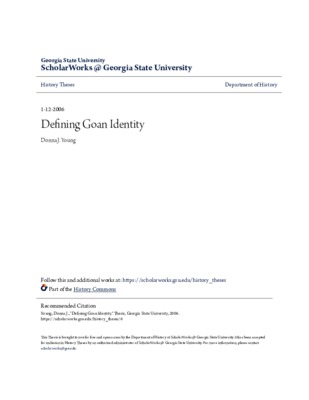 This is an analysis of Goan identity issues in the twentieth and twenty-first centuries using unconventional sources such as novels, short stories, plays, pamphlets, periodical articles,and internet newspapers. The importance of using literature in this analysis is to present how Goans perceive themselves rather than how the government, the tourist industry, or tourists perceive them. Also included is a discussion of post-colonial issues and how they define Goan identity. Chapters include “Goan Identity: A Concept in Transition,” “Goan Identity: Defined by Language,” and “Goan Identity: The Ancestral Home and Expatriates.” The conclusion is that by making Konkani the official state language, Goans have developed a dual Goan/Indian identity. In addition, as the Goan Diaspora becomes more widespread, Goans continue to define themselves with the concept of building or returning to the ancestral home