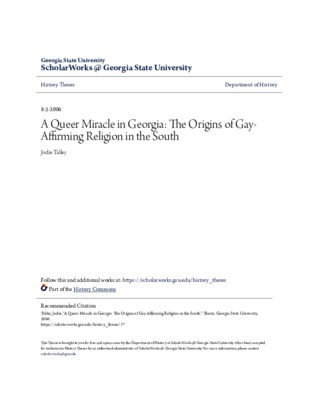 A Queer Miracle in Georgia: The Origins of Gay-Affirming Religion in the South

By Jodie Talley
Get PDF (2 MB)

The intersection of homosexuality and faith values, a very controversial topic in the United States, has generated both social accommodation as well as “culture war.” In the past forty years this nation has witnessed the establishment of predominantly gay congregations, gay “welcoming” and “affirming” mainstream congregations, as well as virulently anti-gay religious organizations. This study investigates the origins and evolving history of gay and gay-affirming religious traditions in America with an emphasis on Atlanta and Georgia. Primarily an oral history, this project draws from eighty-two interviews as well as primary and secondary documents to construct this history. Several conclusions unfold: 1) Southern culture, though uniquely religious, has been more accommodating of gays and lesbians than heretofore appreciated; 2) citizens of Atlanta and the state of Georgia have been primary historical producers of gay and gay-affirming religious culture and institutions in America; 3) gay religious history pre-dates the Stonewall Rebellion, thus troubling and adding nuance to the traditional metanarrative of LGBTQ history; and 4) the paths of and to gay-affirming religious activism and institution building follows several distinct patterns