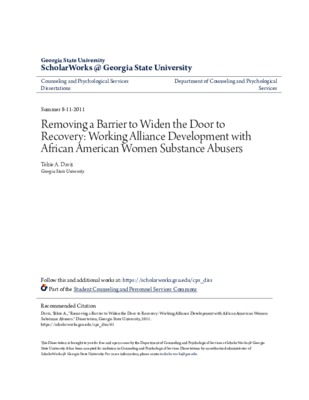 Two groups of therapist characteristics were explored as predictors of working alliance (WA) with African American women substance abusers (n = 102). This study tested the hypotheses that Population Sensitive Therapist Characteristics (PSTCs; i.e. multicultural competence [MC], egalitarianism [EG], and empowerment [EM]) would explain an additional and significant amount of the variance in WA beyond that explained by general therapist characteristics (GTCs; i.e. empathy, regard, and genuineness); and that GTCs partially mediate the effect of each individual PSTC on WA. Hierarchical multiple regression revealed that PSTCs explained an additional 12% of the variance in WA, after controlling for GTCs. Bootstrapping analyses demonstrated that GTCs fully mediated the effect of MC and EM on WA, and partially mediated the effect of EG on WA. Together, these findings suggest therapists can facilitate a stronger WA with the target population through demonstration of PSTCs and that these characteristics are facilitative in whole or in part, because they increase the likelihood the therapist is perceived as demonstrating GTCs (i.e. empathy, regard, and genuineness)