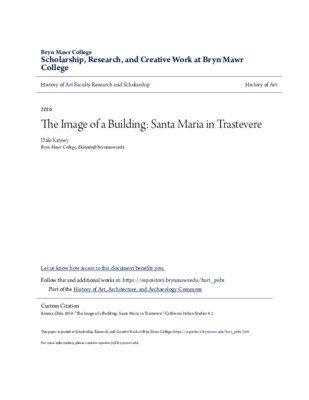 The Image of a Building: Santa Maria in Trastevere

Buildings can only be seen through images, including sensory impressions (perceptual images), views created by artists and photographers (pictorial images), the analytical graphics of architects (analytical images), and now, digital means of representation. This article is concerned with another level of image: the themes or metaphors the building was intended to convey (intended images); the image projected by contingent factors such as age, condition, and location (projected images), and the collective image generated by the interaction of the building’s appearance with the norms and expectations of its users and beholders. The Roman church of Santa Maria in Trastevere is taken as a case study. Its collective image among a cyber community of contemporary tourists is compared to its intended images in the twelfth century, when it was erected, and in the nineteenth century when it was effectively remade. The role of the image in constituting communities of users and viewers is foregrounded