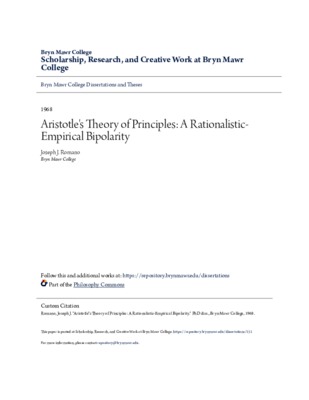 Primarily, this paper attempts to analyze Aristotle\u27s notion of principle as it is uniquely applied throughout his works. Principle is a basic notion; and it is, moreover, the basic notion in Aristotle\u27s philosophy. The purpose here is to establish as precisely as possible the meaning of \u27principle\u27 and the role that it plays in Aristotelian thought. It is shown that the meaning of principle involves a certain bipolar tension which strains between a logico-epistemic pole and an on tic pole. This tension grounds a philosophy which constantly vacillates between a rationalistic idealism and an empirically oriented naturalism. The Greek term under consideration is ἀρχή although it should be noted that Aristotle does not aIways use the term in a technical sense; and, at times, when he refers to principle in a technical sense, he may not always use ἀρχή. In Chapter I, we claim that Aristotle\u27s basic and primary assumption-that there is a real world which is intelligible--necessarily involves a notion of principles that somehow connects the real world with intelligible expressions of it. In other words, principles manifest a bipolar condition of being both mental (the intelligible expression) and real (objectively grounded in the world). Descartes is seen as the first philosopher to challenge seriously the objective pole of principles. For Descartes, philosophical inquiry begins with principles of knowledge rather than with principles of being. The Cartesian assault on Aristotle\u27s principles may be unwarranted if it is realized that his (Aristotle\u27s) search after principles of being included the cognitional pole so that being is never really separated from one\u27s clear and distinct understanding of it. Chapter II investigates the bipolarity of Aristotelian principles in the realm of perishable entities. Through his notion of principles, Aristotle attempts to solve an enigma of being and knowing. How can sensible entities be individual and yet definable, unique and yet intelligible? How can a world of particulars be admitted when knowledge is of the universal ? Principles provide both the concrete unity and the ground for universal understanding in Aristotle\u27s attempt to solve the problem. It is the ontic pole of principles that is explanatory of the concreteness and unity of individuals, while it is the logico-epistemic pole which serves as the basis for univers ·ality and intelligibility. Four specific characteristics of principles as applied to perishable entities are then revealed. Principles are seen to be as: 1) referential or relational; 2} potential for universality; 3) irreducible contraries; and 4) analogous. Concerning the first, principles are to be viewed not as entities or things but rather as certain ways whereby things are known. The second characteristic pursues in specific detail the problem of universal knowledge versus individual entities. From the point of view of a being\u27s potentiality, one may realize a universal ground of being many things. From the point of view of a being\u27s actuality, one grasps the individual entity in an immediate sensory awareness. The third characteristic remolds the pre-Socratic and Platonic notions of contrariety. The pre-Socratic notion of archai as contraries (according to Aristotle) cannot be true principles, since being material elements they are not basic and irreducible. Plato\u27s contrary forms cannot be true principles since they are separate from what they purport to explain. Aristotle\u27s bipolar principles can be irreducible and contrary and yet be simultaneously in things (e.g., act-potency). The fourth characteristic allows both sameness and difference to permeate the various levels of being so that any hierarchy of being is freed from an uncompromising fixity or rigidity. Analogous principles explain a hierarchy of horizontal levels of classes with a vertical continuity running through the class structures (i.e., the genera and species). In Chapter III, Aristotle\u27s imperishable realm (ἄφθαρτος) is compared with his sublunar realm. The two realms are seen to be different and yet similar, and it is analogous principles that effect these differences and similarities. Aristotle\u27s application of the same principles to both realms allows him to include both perishables and imperishables under the realm of nature. This spanning of the whole range of nature by principles warrants a transcendental character of principles that is contrasted with Aristotle\u27s search in the Physics and the Metaphysics for a Transcendent One. Again, a bipolarity is indicated which strains between a rationalistic tendency toward a Transcendent Being which might explain the whole of reality and a tendency toward more naturalistic explanations in terms of transcendental principles. The last Chapter traces the role of principles in the realm of reason where archaiare applied to Aristotle\u27s theory of demonstration and his general notion of science. Two basic kinds of demonstration are seen as permeating Aristotle\u27s theory of methodology. The first we label axiomatic demonstration. This is demonstration in the strict sense of deducing certain and necessary conclusions from self-evident principles. These worthy and noble first principles (ἀξιώματα) are the source of intellectual delight and contain more intrinsic worth than the conclusions that are drawn from them. The second kind of demonstration is termed hypothetical demonstration. This is demonstration in a looser sense in which principles are difficult to know and demonstration proceeds from hypotheses and postulates. Conclusions arrived at by means of this type of deduction tend toward probability rather than certitude. Concerning the problem of how one acquires knowledge of the first principles, we again maintain that Aristotle vacillates between the poles of rationalism and realism. The former pole involves an analytic intuition in which the world of experience is shunned and a mere analysis of terms and concepts reveals the primary axioms. The latter advocates an inductive intuition in which experience plays a necessary role in one\u27s grasping of the principles. Finally, it is shown that there is more than one meaning to Aristotle\u27s concept of science (ἐπιστήμη)