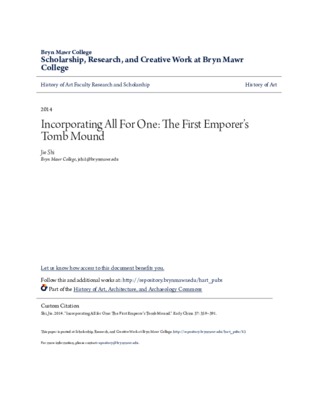 Incorporating All For One: The First Emporer’s Tomb Mound

The towering earthen mound standing at the center of the First Emperor of Qin, Qin Shihuangdi’s (259–210 B.C.E.) Lishan necropolis at present-day Lintong in Xi’an, Shaanxi province was arguably the single greatest burial marker in ancient China. For centuries, this gigantic unopened monument has sparked curiosity and aroused interest among people regarding its nature. Without physically damaging the target, in 2001–2003 Chinese archaeologists used a new geophysical remote sensor to scan the surface of the mound, digitally probed into its inner structure, and detected a nine-stepped wall that bounds an aboveground burial shaft stretching down deep into the ground. This novel structure begs the following questions: what are the basic elements of this tomb mound, how do they work together within a coherent plan, and why was it made? Based on previous scholarship, this article conducts a more thorough analysis of the tomb mound and compares it with the excavated Eastern Zhou royal tombs of the Qin, Wei, Zhao, Qi, Chu, Han, Yan, and Zhongshan states. The results demonstrate that rather than following a single model of a single state, the Lishan tomb mound incorporated almost all the major features of its Eastern Zhou predecessors, including but not limited to the external tumulus, the internal stepped wall or terrace, simulated galleries, and the freestanding ritual halls. This article argues that by creatively incorporating all the provincial ingredients into one imperial unity, the complex tomb mound unified multiple funerary practices of China. What’s more, the tomb mound, most likely constructed after Qin’s political unification of China in 221 B.C.E., perfectly embodies the new notion of empire and the political ambition of the First Emperor who strov