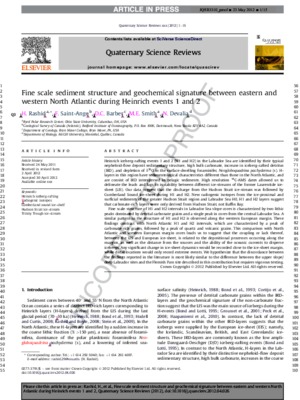 Heinrich iceberg-rafting events 1 and 2 (H1 and H2) in the Labrador Sea are identified by their typical nepheloid-flow deposit sedimentary structure, high bulk carbonate, increase in iceberg-rafted detritus (IRD), and depletion of δ18O in the surface-dwelling foraminifer, Neogloboquadrina pachyderma (s). H-layers in this region have sedimentological characteristics different than those in the North Atlantic, and consist of IRD interspersed in pelagic sediments. High resolution 14C-AMS dates allowed us to delineate the leads and lags in instability between different ice-streams of the former Laurentide ice-sheet (LIS). Our data suggest that the discharge from the Hudson Strait ice-stream was followed by Cumberland Sound ice-sheet during H1 and H2. New radiogenic isotopes from the ice-proximal and surficial sediments of the greater Hudson Strait region and Labrador Sea H0, H1 and H2 layers suggest that carbonate-rich layers were only derived from Hudson Strait, not Baffin Bay. Fine scale structure of H1 and H2 intervals in Labrador Sea slope cores is characterized by two lithic peaks dominated by detrital carbonate grains and a single peak in cores from the central Labrador Sea. A similar pattern in the structure of H1 and H2 is observed along the western European margin. These findings contrast with North Atlantic H1 and H2 intervals, which are characterized by a peak of carbonate-rich grains, followed by a peak of quartz and volcanic grains. This comparison with North Atlantic and western European margin cores leads us to suggest that the coupling or lack thereof, between the LIS and European ice-sheet, is related to the depositional processes occurring along the margins, as well as the distance from the sources and the ability of the oceanic currents to disperse icebergs. Any significant change in ice-sheet dynamics would be recorded close to the ice-sheet margin, while distal locations would only record extreme events. We hypothesize that the discordance between the findings reported in the literature is most likely similar to the difference between the upper slope/deep Labrador sites and the Flemish Pass site described in this contribution but requires vigorous testing. Crown Copyright (c) 2012 Published by Elsevier Ltd. All rights reserved