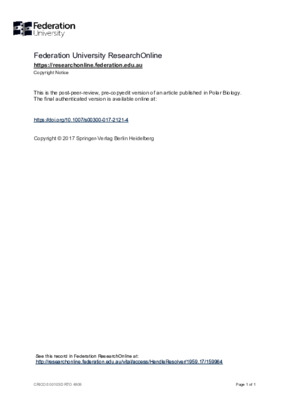 The fate of the non-native Collembolon, Hypogastrura viatica, at the southern extent of its introduced range in Antarctica

Invasive species present a risk to Antarctic ecosystems by altering community structure and function. Reports of non-native invertebrates are increasing at Antarctic sites subject to tourism industry and national operator activity. Furthermore, dispersal of existing non-native species to other Antarctic sites may greatly expand their distributions and increase the spatial scale of potential impacts. Consequently, non-native species occurring near logistical hubs present an enhanced risk. The non-native Collembolon, Hypogastrura viatica, was introduced to Léonie Island, Ryder Bay, near the logistical hub of Rothera Research Station, Rothera Point, Adelaide Island, at some point before 1993, but no attempt had been made to assess the extent of its distribution in the local area. In this study, we surveyed the regularly frequented islands of Ryder Bay and Rothera Point to attempt to assess the continued presence and distribution of this species. Hypogastrura viatica was not identified amongst the 36,796 Collembola specimens extracted from 138 samples taken from the islands and Rothera Point. With no evidence of the continued presence of this non-native Collembolon in the local area, either H. viatica has become extinct or has such a restricted spatial distribution that our monitoring programme failed to detect it. In light of these results, existing local biosecurity measures will be maintained as a precautionary measure to reduce the risk of further anthropogenic dispersal of this potentially invasive Collembolon as well as of any other species imported unintentionally in future. © 2017, Springer-Verlag Berlin Heidelberg