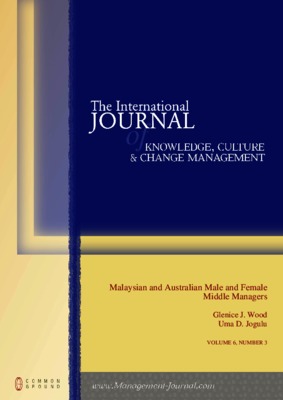 By Glenice Wood and Uma Jogulu
Get PDF (2 MB)

This paper outlines the rise of women in management worldwide, and considers why so few women achieve senior or executive management positions. This slow advance of women into senior roles is unexpected given that the changes in organisations today are believed to require more ‘feminine leadership’. A decrease in the emphasis on masculine characteristics for managers is reported, and a requirement that more ‘feminine leadership’ needs to be adopted by organisations in order to ensure their survival in the future (Powell, Butterfield & Parent, 2002, p.189). Recent empirical research reports that there are differences in leadership style between male and female managers, and the findings suggest that women exhibit more transformational leadership than their male counterparts, with this style being strongly equated with effective leadership (Eagly, Johannesen-Schmidt, van Engen, 2003). However, these findings are based on western research, and it may be that cross cultural research will yield a different picture (House, Hanges, Javidan, Dorfman, & Gupta, 2004). Leadership and leadership styles may be conceptualised differently in a more paternalistic society. To explore this possibility, a cross cultural study was conducted in Malaysia and Australia. It is hypothesised that countries that are paternalistic in cultural values will exhibit a stronger constraint on women in management roles, which may impact on workplace attitudes, aspirations for promotion and style of leadership exhibited. Therefore, it is possible that the career advancement of women may be more problematic for Malaysian managerial women than their Australian counterparts. Results from an initial pilot study in Malaysia and Australia are outlined, and highlight some interesting similarities and differences to what are reported in the western literature.C