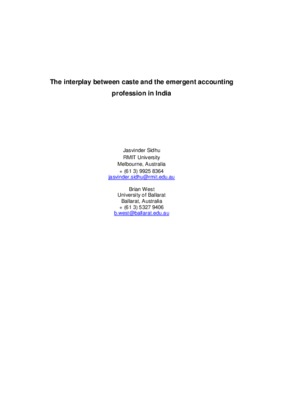 The interplay between caste and the emergent accounting profession in India

By Jasvinder Sidhu and Brian West
Get PDF (311 KB)

This paper examines the interplay between caste and the organised accounting profession in India following the formation of the Institute of Chartered Accountants of India (ICAl) in 1949. The distinctive Indian caste system divides Hindu society into a hierarchy of four "varnas". As well as being traditional markers of social status, these "varnas" have also been identified with particular occupational categories. Using the earliest available membership list of the ICAl (being 1953, just four years after formation), a comprehensive classification of the caste status of the Hindu members of the ICAI was undertaken. This revealed that, relative to the general population, the Brahman upper caste was significantly over-represented in the membership of the ICAl. In this way, the formation of the ICAl predominantly benefitted an already privileged social stratum and contributed to perpetuating traditional caste hierarchies within the context of the modern occupation of professional accounting