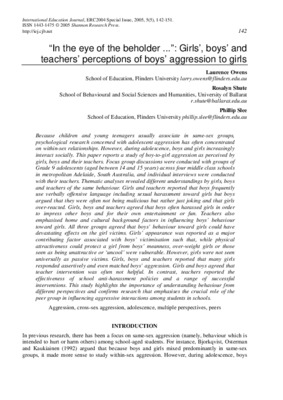 "In the eye of the beholder...": Girls', boys' and teachers' perceptions of boys' aggression to girls

Because children and young teenagers usually associate in same-sex groups, psychological research concerned with adolescent aggression has often concentrated on within-sex relationships. However, during adolescence, boys and girls increasingly interact socially. This paper reports a study of boy-to-girl aggression as perceived by girls, boys and their teachers. Focus group discussions were conducted with groups of Grade 9 adolescents (aged between 14 and 15 years) across four middle class schools in metropolitan Adelaide, South Australia, and individual interviews were conducted with their teachers. Thematic analyses revealed different understandings by girls, boys and teachers of the same behaviour. Girls and teachers reported that boys frequently use verbally offensive language including sexual harassment toward girls but boys argued that they were often not being malicious but rather just joking and that girls over-reacted. Girls, boys and teachers agreed that boys often harassed girls in order to impress other boys and for their own entertainment or fun. Teachers also emphasised home and cultural background factors in influencing boys' behaviour toward girls. All three groups agreed that boys' behaviour toward girls could have devastating effects on the girl victims. Girls' appearance was reported as a major contributing factor associated with boys' victimisation such that, while physical attractiveness could protect a girl from boys' meanness, over-weight girls or those seen as being unattractive or 'uncool' were vulnerable. However, girls were not seen universally as passive victims. Girls, boys and teachers reported that many girls responded assertively and even matched boys' aggression. Girls and boys agreed that teacher intervention was often not helpful. In contrast, teachers reported the effectiveness of school anti-harassment policies and a range of successful interventions. This study highlights the importance of understanding behaviour from different perspectives and confirms research that emphasises the crucial role of the peer group in influencing aggressive interactions among students in schools. © 2005 Shannon Research Press.C