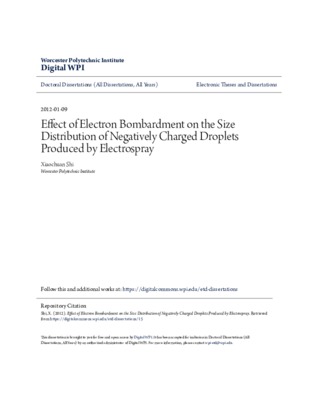 By Xiaochuan Shi
Get PDF (3 MB)

This study explores an innovative approach to control the droplet size distribution produced by an electrospray with the intention of eventually being able to deliver precisely controlled quantities of precursor materials for nanofabrication. The technique uses a thermionic cathode to charge the droplets in excess of the Rayleigh limit, leading to droplet breakup or fission. The objective of these experiments was to assess whether the proposed technique could be used to produce a new droplet size distribution with a smaller mean droplet diameter without excessively broadening the distribution. An electrospray was produced in a vacuum chamber using a dilute mixture of ionic liquid. During their transit from the capillary source to a diagnostic instrument, the resulting droplets were exposed to an electron stream with controlled flux and kinetic energy. The droplets were sampled in an inductive charge detector to characterize changes in the size distribution. A positively biased anode electrode was used to collect electron current during droplet exposure. This collected current was used as the primary control variable and used as a measure of the electron flux. The anode bias voltage was a secondary control variable and used as a measure of the electron energy. In a series of seven tests, two sets showed evidence of fission having occurred resulting in the formation of two droplet populations after electron bombardment. Three sets of results showed evidence of a single droplet population after electron bombardment, but shifted to a smaller mean diameter, and one set of results was inconclusive. Because of the large standard deviation in the droplet diameter distributions, the two cases in which a second population was evident were the strongest indication that droplet fission had occurred