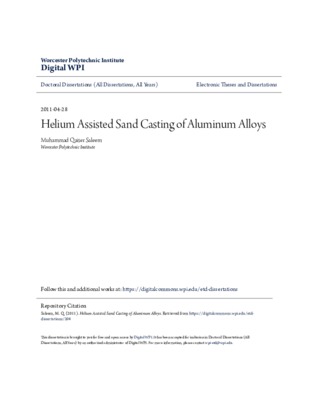 Sand casting is the most widely used casting process for both ferrous and non-ferrous alloys; however, the process is marred by large grain size structures and long solidification times. The coarser microstructure has a negative effect on the mechanical properties of the cast components and the long processing time affects the overall productivity of the process. The research reported herein addresses these problems for aluminum sand castings by enhancing the rate of heat extraction from the casting by replacing air, which is typically present in the pores of the sand mold and has a relatively low thermal conductivity by helium which has a thermal conductivity that is at least five times that of air in the temperature range of interest. The effect of (1) the flow rate of helium, (2) the way in which it is introduced into the mold, and (3) the mold design on (a) the average grain size, (b) the secondary dendrite arm spacing, and (c) the room temperature tensile properties of castings is investigated and compared to their counterparts produced in a typical sand casting process. In addition, a cost analysis of the helium-assisted sand casting process is performed and an optimum set of parameters are identified. It is found that when the helium-assisted sand casting process is performed with close to the optimum parameters it produces castings that exhibit a 22 percent increase in ultimate tensile strength and a 34 percent increase in yield strength with no significant loss of ductility, no degradation in the quality of the as-cast surfaces, and no significant increase in the overall cost