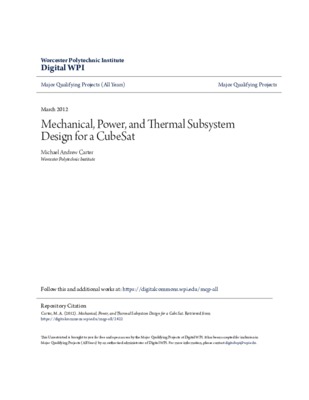 Mechanical, Power, and Thermal Subsystem Design for a CubeSat

The goals of this Major Qualifying Project (MQP) project were the design of thermal, mechanical, and power subsystems for a CubeSat supporting a university-led science mission to orbit an X-ray spectrophotometer. The spacecraft thermal analysis included calculation of unsteady temperature distributions over the course of several orbits. This analysis included radiation from the sun and earth as well as a preliminary analysis of heat generation from internal components. The mechanical design included component and assembly-level, solid models of several spacecraft configurations and a preliminary stress analysis. The power subsystem design included component selection for power generation, management, and distribution as well as energy storage