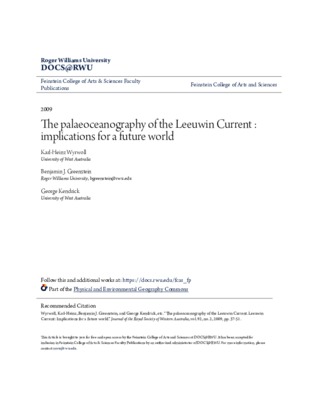 The palaeoceanography of the Leeuwin Current : implications for a future world

Long-term progressive changes of the Leeuwin Current are linked to plate and ocean basin ‘geography’ and Cenozoic global climates and palaeoceanography. Suggestions of the presence of a proto-Leeuwin Current as early as late Middle to Late Eocene times (c. 35–42 Ma) cannot be verified by the fossil record of the western margin of Australia. “Leeuwin Current style” circulation around Australia was certainly established by the early Oligocene, in response to palaeogeographic changes in the Tasman Strait. This, followed by tectonic eorganisation of the Indonesian Archipelago throughout the Miocene, provided a palaeogeographic setting, which by the Pliocene was essentially that of today. The subsequent history of the Leeuwin Current comprises climatically-induced changes operating over orbital and sub-orbital temporal scales. Specifically, the advent of Pleistocene-style climates, especially over the last 800 000 years, and their associated interglacial – glacial states provide the two end-member climate-ocean states that have characterised Leeuwin Current activity during that time. Indications of the nature of these contrasting states is provided by: (i) the Last Interglacial (c. 125 Ka) during which sea level was higher by some +4 m, and with higher sea surface temperatures (SSTs) clearly indicating a more ‘active’ Leeuwin Current; and (ii) the Last Glacial Maximum (21 Ka), during which sea level wassome 130 m lower than today, resulting in massive shelf extensions along the coast of Western Australia, ccompanied by reduced Indonesian Throughflow, lower low latitude SSTs and changes in the Western Pacific Warm Water Pool, and with these changes, possibly reduced Leeuwin Current activity. Sub-orbital scale luctuations in current strength are driven by global climate change associated with El Niño – La Niña events as well as regional climatic changes driven by volcanism. These forcing mechanisms operate at time scales well within the reach of human experience, and provide important comparative data for predicting the response of the Leeuwin Current to climate change predicted for this century. Studies of the impact of changes in the vigour of the Leeuwin Current on shallow marine communities are in their infancy. Coupling climate models with geological analogues provide important research agenda for predicting the trajectory of future changes to the Leeuwin Current and their impacts on the marine biota of coastal Western Australia