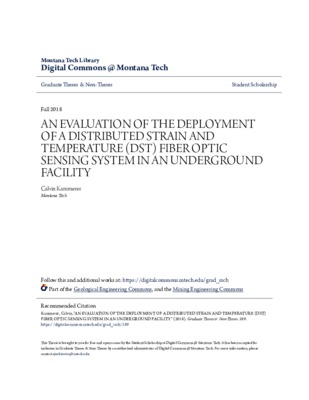 By Calvin Kammerer
Get PDF (8 MB)

In an effort to further mine safety and utilize the recent advances in fiber optic sensors’ distributed sensing capabilities, a research project at Montana Tech has deployed fiber optic sensors in an underground environment. The method of Brillouin scattering that has documented success in a mining environment will be used because it shows the greatest potential for detecting both temperature and strain in the deployed environment, as well as the ability to differentiate between the two. The primary objective of the Montana Tech research is to create a scenario where the distributed sensing technology can be evaluated for its sensing capabilities in a rugged underground environment, at the same time creating a protocol for this particular type of sensor deployment. A Ominsens DITEST signal interrogator, along with two strain sensing and two temperature sensing cables will constitute the fiber optic sensor component, and an array of documented point sensing instrumentation consisting of both strain and temperature sensors will validate the FOS sensor data. Calibrations of the FOS cables were extensively conducted in a Montana Tech laboratory to accuracy quantify the response of the FOS cables to strain and temperature. All four FOS cables and traditional sensors were deployed around and through boreholes in a structural pillar in the Underground Mine Education Center (UMEC). During the 3-month long data collection campaign multiple events such as the construction of the protective trench and the direct FOS cable to rock attachment allowed for indepth response analysis because the nature of the deployment area was static. A comparison of the FOS data and the traditional sensory data showed that the strain detection of the FOS technology was comparable to the traditional technologies in the microstrain range, however, the FOS temperature data was not as accurate without a relative baseline. Comparing the two strain cables showed similarities, with the Mil-Tec OCC cable being less expensive and easier to repair. Of the two temperature sensing cables, only the Brugg T-85 temperature cable lasted longer than a week and provided the only reliable temperature data. The lessons learned throughout the UMEC deployment and data collection campaign were compiled into a FOS deployment protocol in an effort to pass on the knowledge gained from these experiences. From all of the data collected and comparisons made, the FOS cables proved their durability and ability to detect environmental changes within +/-100 microstrain of traditional sensors. Of the FOS cables deployed, the cable that demonstrated the overall best value was the Mil-Tac OCC cable. Future research that could benefit FOS sensing the most would be additional calibration research and deployment of the FOS cables to a site with less static ground conditions