Evidence for the Eutrophication of Selected Coastal Dunal Lakes: Historical Comparison of Indices for Nutrient Enrichment

Three coastal Oregon dunal lakes, Mercer Lake, Munsel Lake, and Woahink Lake, were studied in an effort to determine if eutrophication has occurred since initial studies were conducted in 1938 and to determine each lake\u27s current trophic status. Data collected in 1991 and 1992 for phytoplankton primary productivity; chlorophyll gi phytoplankton species, biovolumes, and densities; nutrients; optical characteristics; and dissolved oxygen were compared with historical data sets. Additional data for zooplankton, benthic invertebrates, and other relevant limnological data were used to more completely characterize each lake. Phytoplankton primary productivity measurements indicate that biological productivity has increased at each lake since 1969-1971. Chlorophyll ~ concentrations appear to have increased only at Mercer Lake. Other limnological data are insufficient to determine if and to what extent these lakes have eutrophicated. Based on data collected in 1991 and 1992, the current trophic state of each lake can be described as follows: Mercer Lake is mesotrophic to eutrophic but closer to mesotrophic, Munsel Lake is oligotrophic to mesotrophic but closer to mesotrophic, and Woahink Lake is oligotrophic to mesotrophic but closer to oligotrophic 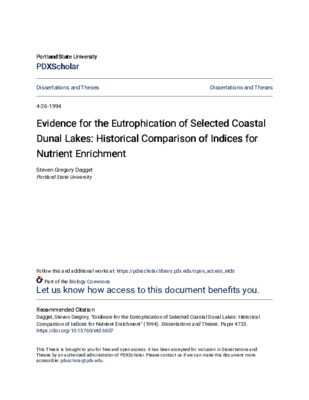 This paper was published in PDXScholar.