The Dynamics of Balanced Expansion in Monetary Economies with Sovereign Debt

Böhm V. The Dynamics of Balanced Expansion in Monetary Economies with Sovereign Debt. Center for Mathematical Economics Working Papers. Vol 602. Bielefeld: Center for Mathematical Economics; 2018.The paper examines the role of fiscal and monetary policy on the dynamics of monetary expansion in a macroeconomy. Its microeconomic structure defined by producers with neoclassical production functions, heterogeneous OLG consumers, and a stationary fiscal and monetary policy induces a consistent dynamic closed macroeconomic model of the AS-AD type. Existence and uniqueness of a temporary competitive monetary equilibrium are shown in a two-market economy (determining prices, wages, output, and employment) under a standard set of neoclassical conditions on production, consumer preferences, fiscal and monetary parameters. Comparative statics on prices, wages, and allocations for all levels of the state variables: money balances, debt, and expectations are shown. The dynamic development of temporary equilibria is defined by orbits of a dynamical system generated by three mappings of the one-step (recursive) time change, one for each state variable. The paper defines and describes explicitly the forecasting rules for prices as functions (so-called perfect predictors) which induce perfect foresight along orbits of the economy. It establishes sufficient conditions for their existence and uniqueness and provides a constructive characterization of perfect predictors for the AS-AD economy. Given existence of a globally perfect predictor, perfect foresight holds along all orbits of the economy. The results show that constant intertemporal allocations are uniquely gener- ated by orbits of balanced expansion of both money balances and public debt. Generically, depending on parameters, there exist two or no balanced paths while stationary equilibria with zero inflation exist only on a small (non-open) set of parameters. For a benchmark case (defined by isoelastic utility and production functions) perfect foresight dynamics exist globally and are monotonic (no cycles). There exist at most two balanced paths one of which is always unstable. Their existence and stability are influenced in a decisive way by fiscal and monetary parameters determining steady state inflation rates, allocations, as well as bounds for sustainable debt-to-GDP ratios 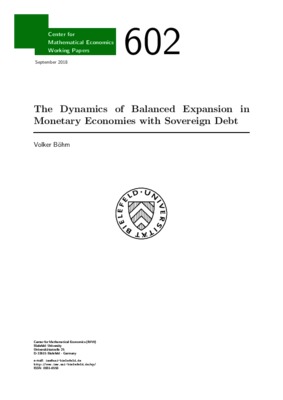