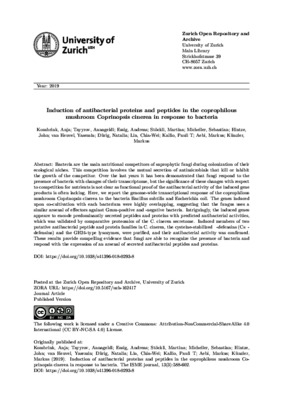 Bacteria are the main nutritional competitors of saprophytic fungi during colonization of their ecological niches. This competition involves the mutual secretion of antimicrobials that kill or inhibit the growth of the competitor. Over the last years it has been demonstrated that fungi respond to the presence of bacteria with changes of their transcriptome, but the significance of these changes with respect to competition for nutrients is not clear as functional proof of the antibacterial activity of the induced gene products is often lacking. Here, we report the genome-wide transcriptional response of the coprophilous mushroom Coprinopsis cinerea to the bacteria Bacillus subtilis and Escherichia coli. The genes induced upon co-cultivation with each bacterium were highly overlapping, suggesting that the fungus uses a similar arsenal of effectors against Gram-positive and -negative bacteria. Intriguingly, the induced genes appeare to encode predominantly secreted peptides and proteins with predicted antibacterial activities, which was validated by comparative proteomics of the C. cinerea secretome. Induced members of two putative antibacterial peptide and protein families in C. cinerea, the cysteine-stabilized αβ-defensins (Csαβ-defensins) and the GH24-type lysozymes, were purified, and their antibacterial activity was confirmed. These results provide compelling evidence that fungi are able to recognize the presence of bacteria and respond with the expression of an arsenal of secreted antibacterial peptides and proteins