The Effect of Climate Change on Thailand’s Agriculture

Agriculture is potentially affected by climate change especially in developing countries where the agricultural sector plays a crucial role including Thailand. The objectives of this study are to analyze the effect of climate change on Thailand’s agriculture and investigate implications for greenhouse warming under future climate change scenarios using the Ricardian approach allowing a variety of the adaptations that farmers make in response to changing economic and climate conditions. The study finds that both temperature and precipitation significantly determine farmland values. Summer temperature, precipitation in the early rainy and summer season negatively affect the farmland values, while winter temperature, precipitation in the late rainy and winter season enhance the farmland values. Overall, the projected negative impacts of climate change on Thailand’s agriculture during 2040-2049 range from $24 to $94 billion. By downscaling the analysis to the province level, this article finds that western, upper part of central, and the left part of northern regions are projected to be better off, while southern, eastern regions, lower part of central, and the right part of northern regions is projected to be worse off 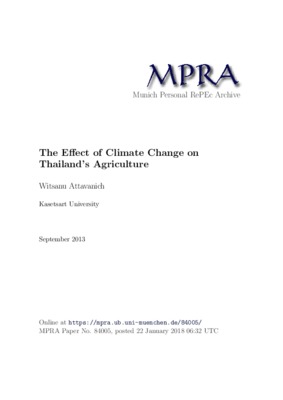