On the Determinants of output Co-movements in the CEMAC Zone:Examining the Role of Trade, Policy Channel, Economic Structure and Common Factors

This paper aims to examine the forces driving co-movements in the CEMAC. For that purpose, a two-step methodology is employed. First, a DCC-GARCH is used to assess correlations between member states. Second, panel models are employed to examine whether and the extent to which trade, policies, economic structure and common factors determine output growth correlations. Results from the DCC-GARCH model suggest that spikes of co-movements appear during high volatility oil prices episodes namely the 1998 oil crisis, the 2008 financial crisis and the recent 2014 collapse. Panel regressions suggest that trade has negative effects on output co-movements. The differential fiscal policy displays strong and significant positive effects on output correlations while the role of the single monetary policy is not robust across models. The degree of specialization has negative effects while the financial development increase co-movements. The landlocked situation of Chad and Central Africa reduces their co-movements with other member states. Results also reveal non-linearities in the effects of trade linkages which are non-significant when the country is landlocked. As a policy implication, national governments may limit the cyclical behaviour of their fiscal policy in order to in increase co-movements in the region 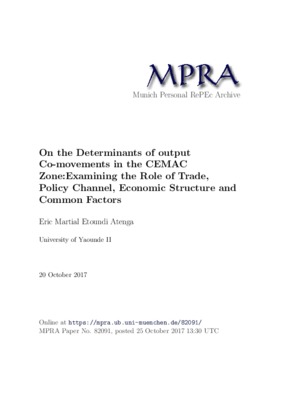