Private sector of any country plays important role in the economic development of the country. It not only provides employment to the people of the country but also goods and services according to the taste of the people. Private investment depends mainly on private borrowing which proves to be the blood for private sector. Private borrowing or credit to private sector is important part of the financial development which measures the financial depth of it. The aim of this paper therefore, is to investigate the impact of government borrowing from central bank and commercial banks on financial development. In this Paper, government borrowing is used as Public domestic debt while credit to private sector (Private borrowing) is used as financial development. Normally, it is frequently observed that when government borrows more from banks, then less amount left for the private borrowing so in this way volume of private investment declines and this is found in this study. There are some other factors which also affected the private borrowing like, taxes, savings and inflation. This study has been done by using time series data of Pakistan from 1972-2015. ARDL Methodology has been used to investigate the relationship of variables. The data resource has been taken from WDI and the reports of state bank of Pakistan as well as different issues of economic survey of Pakistan 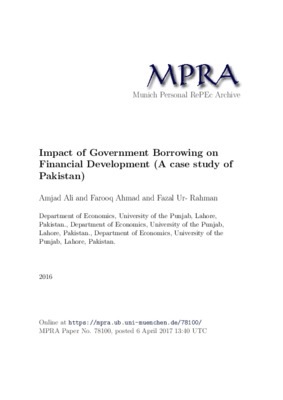