On November 2, 2004, Maine residents will vote on whether to “limit property taxes to 1% of the assessed value of the property.” This report looks at the effects of the property tax cap if it had existed in 2003. Impacts shown in the report are based on the tax cap plan as written, which values property at what it was worth in 1996. We find that Maine towns would have had a shared budget deficit of $687.7 million if the tax cap had existed in 2003. Towns would have lost $50.9 million, or 31.9%, of the taxes paid by vacation homeowners. These impacts would have been lower if the School Finance and Tax Reform Act of 2003 (passed by the voters in June 2004) had been in effect. That Act requires the state to pay 55% of local education costs. In that case, the shared deficit of Maine towns under the tax cap would drop from $687.7 million to $535.2 million. If the tax cap had existed last year, the average tax rate for residential real estate would have dropped from 1.53% to 1.11%. This is more than 1% because the tax cap would allow towns to collect extra taxes for voter-approved debt. Across the state, the tax rate for homeowners would have gone down in 391 towns. It would have gone up in 81 towns because of changes in the way homes are valued for taxes. This means that some people in these towns, but not everyone, would have paid higher taxes if the tax cap had existed last year. People who bought homes in recent years would pay higher taxes, while people who have lived in their homes for several years would pay lower taxes 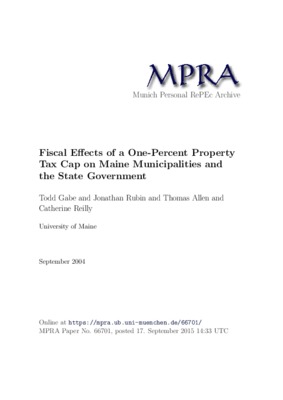