The mechanism and calculus of net balances – Saldenmechanik in German – were the subjects of a theory presented by Wolfgang Stützel in the 1950s. Stützel was “concerned with money flows between economic units and with net changes in the money holdings of these units as a result of such flows” (Hein, 1959). Helmedag’s Saldenmechanisches Modell (SM) invokes this tradition of macroeconomic thinking. During the last twenty years, he used his model as a framework for deliberations on various economic policy measures and goals. Because the mathematical part of the model consists of identities only, it is similar but not identical to equations of the modern system of national accounts (SNA). The conceptional shift between Helmedag’s SM and the modern SNA makes it difficult to confront the model with real data. For this purpose, it has to be embedded in the SNA by adding several variables and by interpreting others in the light of structural similarities between equations of the model and equations of the SNA. Under these conditions, Helmedag’s model can be confronted with real data, and its main conclusions can be tested empirically. It turned out that most of Helmedag’s conclusions were wrong (Quaas, 2007). This paper presents a second trial of an operational interpretation of Helmedag’s SM with the goal of another analysis of this model on the background of observable data after the first attempt of empirical testing was rejected by Helmedag (2007). Most of his fragmentary hints towards an adequate empirical interpretation of his model can be picked up and followed to a slightly more complicated formulation of his model. The following analysis aligned with Helmedag’s suggestions. It disclosed an inherent contradiction of the modified model with the central proposition that indirect taxes (value added taxes) have no effect on national income and employment. But the main problem with the SM consists in the assumption that analytically true statements (definitions) can be interpreted as empirically given causal relations. The result of this study, by applying analytic instruments and methods, is by and large the same as with empirical testing: The model does not fit the conditions of the German economy. Consequently, the statements and recommendations based on SM are not backed by an empirically supported model and should be dismissed as mere speculation 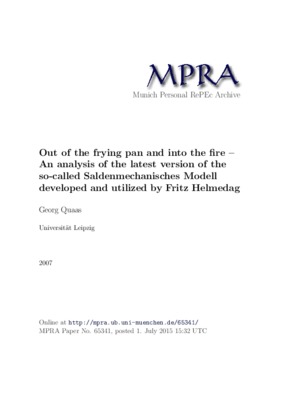