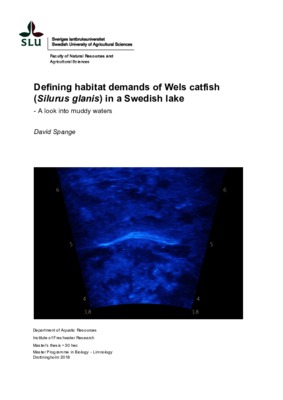 By David Spange
Get PDF (3 MB)

The wels catfish (Silurus glanis) is a rare species in Swedish waters, it demands higher water temperatures than most lakes and rivers can offer. One of the few locations with naturally occurring wels catfish in Sweden is Lake Båven, situated about an hour and a half south of Stockholm, in the county of Södermanland. Due to declines of the Swedish catfish populations, which are mostly a result of human impacts such as the destruction of spawning habitats, conservational actions are now needed in purpose to secure the future of the species in Sweden. The aim of the present study was to gain more knowledge of the poorly understood spawning behaviours, the habitat preferences and the movement patterns of wels catfish in Lake Båven. During field studies in the summer of 2017, answers to these questions were searched for by the use of radio-­telemetry and an advanced imaging sonar. While the telemetry could provide a larger picture of the movements of specific individuals, the imaging sonar could give a more detailed view of, for instance, behaviours, sizes and number of individuals. The observations made can hopefully provide useful knowledge in the strive towards preservation of this threatened freshwater giant. Our findings imply a far more social behaviour within the species than we expected. Recordings from several locations show dozens of mature individuals close together, however, no observations of fry or juveniles could be confirmed. A strong preference was found for habitats containing dense surface-­covering vegetation. The telemetry studies showed a great individual variation in movement between the tagged fishes during the studies, including a high grade of overlap between the different home ranges, implying that the wels might be less territorial than we expected