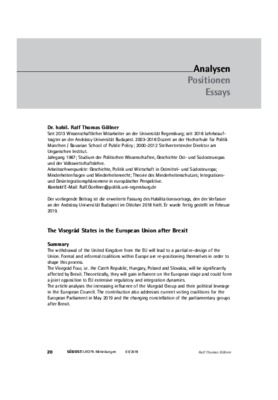 The withdrawal of the United Kingdom from the EU will lead to a partial re-design of the Union. Formal and informal coalitions within Europe are re-positioning themselves in order to shape this process. The Visegrád Four, i.e. the Czech Republic, Hungary, Poland and Slovakia, will be significantly affected by Brexit. Theoretically, they will gain influence on the European stage and could forma joint opposition to EU extensive regulatory and integration dynamics. The article analyses the increasing influence of the Visegrád Group and their political leverage in the European Council. The contribution also addresses current voting coalitions for the European Parliament in May 2019 and the changing constellation of the parliamentary groups after Brexit