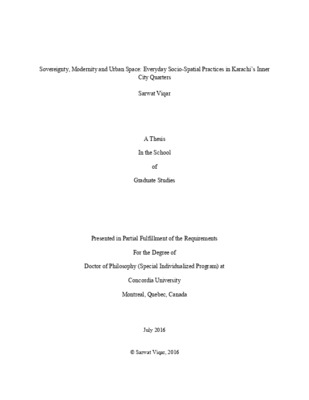 By Sarwat Viqar
Get PDF (5 MB)

This thesis is an interdisciplinary study of the norms and forms of everyday life in the historic quarter of Karachi, Pakistan, as they relate to the sovereign imaginaries that animate the way urban subjects inhabit the space of the city. It examines the evolution of the urban form of the city and shows how historical constructions of space, empire and nation structured present formulations of political subjectivity at the micro and macro levels. Using three disciplinary lenses—history, anthropology and political science—the study captures the diverse forces and sovereignties that have shaped ideas of life and the organization of space in a complex urban environment. Based on previously unexamined archival material and ethnographic field research in the historic inner city area of Karachi, it traces the effects of historic formations of the space of the city on the lived space of the streets and neighbourhoods. It locates the politics of space that unfolds in the streets and neighbourhoods of the city in significant shifts in its colonial and postcolonial history. In doing so it brings attention to the limits of biopolitical subject formation, where the processes of making social and political worlds in common exceed the state’s attempt at discipline and subjugation. The social and political formations that were the object of this study, consist of different kinds of sovereign arrangements that attempt to rule and govern space in parallel to, and often overlapping with, state governance. These sovereign arrangements range from custom and kinship-based organizations to political and religious groups and movements that seek to establish norms around the social and spatial management of the neighbourhood. The finding of this study is that multiple sovereign assemblages act to both challenge and reproduce state sovereignty. These sovereignties operate in different domains – political, religious and clan-based social networks that constantly overlap and engage with the state to claim legitimacy and a share of urban resources. The most significant finding of this study is that sovereign imaginaries drawn upon by these arrangements go beyond the nation to draw upon histories and trajectories that are transregional and transcendental, bringing into question the nation-state’s sole claim to territorial sovereignty