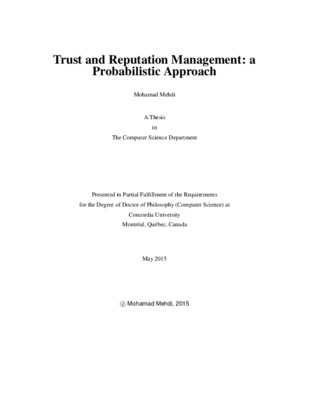 By Mohamad Mehdi
Get PDF (1 MB)

Software architectures of large-scale systems are perceptibly shifting towards employing open and distributed computing. Web services emerged as autonomous and self-contained business applications that are published, found, and used over the web. These web services thus exist in an environment in which they interact among each other to achieve their goals. Two challenging tasks that govern the agents interactions have gained the attention of a large research community; web service selection and composition. The explosion of the number of published web services contributed to the growth of large pools of similarly functional services. While this is vital for a competitive and healthy marketplace, it complicates the aforementioned tasks. Service consumers resort to non-functional characteristics of available service providers to decide which service to interact with. Therefore, to optimize both tasks and maximize the gain of all involved agents, it is essential to build the capability of modeling and predicting the quality of these agents. In this thesis, we propose various trust and reputation models based on probabilistic approaches to address the web service selection and composition problems. These approaches consider the trustworthiness of a web service to be strongly tied to the outcomes of various quality of service metrics such as response time, throughput, and reliability. We represent these outcomes by a multinomial distribution whose parameters are learned using Bayesian inference which, given a likelihood function and a prior probability, derives the posterior probability. Since the likelihood, in this case, is a multinomial, a commonly used prior is the Dirichlet distribution. We propose, to overcome several limitations of the Dirichlet, by applying two alternative priors such as the generalized Dirichlet, and Beta-Liouville. Using these distributions, the learned parameters represent the probabilities of a web service to belong to each of the considered quality classes. These probabilities are consequently used to compute the trustworthiness of the evaluated web services and thus assisting consumers in the service selection process. Furthermore, after exploring the correlations among various quality metrics using real data sets, we introduce a hybrid trust model that captures these correlations using both Dirichlet and generalized Dirichlet distributions. Given their covariance structures, the former performs better when modeling negative correlations while the latter yields better modeling of positive correlations. To handle composite services, we propose various trust approaches using Bayesian networks and mixture models of three different distributions; the multinomial Dirichlet, the multinomial generalized Dirichlet, and the multinomial Beta-Liouville. Specifically, we employ a Bayesian network classifier with a Beta- Liouville prior to enable the classification of the QoS of composite services given the QoS of its constituents. In addition, we extend the previous models to function in online settings. Therefore, we present a generalized-Dirichlet power steady model that predicts compositional time series. We similarly extend the Bayesian networks model by using the Voting EM algorithm. This extension enables the estimation of the networks parameters after each interaction with a composite web service. Furthermore, we propose an algorithm to estimate the reputation of web services. We extend this algorithm by leveraging the capabilities of various clustering and outlier detection techniques to deal with malicious feedback and various strategic behavior commonly performed by web services. Alternatively, we suggest two data fusion methods for reputation feedback aggregation, namely, the covariance intersection and ellipsoidal intersection. These methods handle the dependency between the information that propagates through networks of interacting agents. They also avoid over confident estimates caused by redundant information. Finally, we present a reputation model for agent-based web services grouped into communities of homogeneous functionalities. We exploit various clustering and anomaly detection techniques to analyze and identify the quality trends provided by each service. This model enables the master of each community to allocate the requests it receives to the web service that best fulfill the quality requirements of the service consumers. We evaluate the effectiveness of the proposed approaches using both simulated and real data