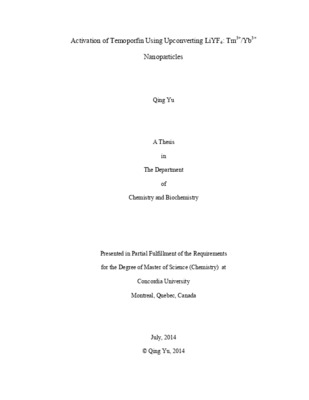 A novel and facile approach has been developed to functionalize lithium yttrium fluoride (LiYF4:Tm3+/Yb3+) upconverting nanoparticles with the second generation photosensitizer 5,10,15,20-tetra(m-hydroxyphenyl)chlorin (m-THPC, Temoporfin, Foscan®) for photodynamic therapy. The synthesized nanoconstruct was capable of generating singlet oxygen under near-infrared excitation. The upconverting nanoparticles LiYF4:Tm3+/Yb3+ were prepared via the thermal decomposition method. A post-synthesis treatment with HCl was applied to render the nanoparticles monodispersible in aqueous solution, as well as leaving positive charges on the nanoparticle’s surface for conjugating potential ligands with negative charges via electrostatic interaction. m-THPC has been modified using a bio-compatible linker 4-(bromomethyl)benzoic acid (BMBA), which not only facilitated the grafting of the m-THPC onto the nanoparticle’s surface but also induced a bathochromic shift of the most intense blue absorption peak (Soret band) of m-THPC which resulted in an overlap with the blue emission peak(s) from LiYF4:Tm3+/Yb3+. The overlap is of paramount importance for the fluorescence resonance energy transfer from the nanoparticle to the photosensitizer. The bathochromic shift of the Soret band has been studied using computational chemistry by stimulating the electronic and optical properties of m-THPC and m-THPC-MBA. In vitro cell viability test was carried out and the results showed the nanoconstruct was capable of causing cell death up to 70% under 980 nm irradiation for a period of 1 hour. The irradiation with near-infrared light gives a deep tissue penetration and the approach to synthesize this nanoconstruct is very general and could be applied to prepare other photosensitizers in photodynamic therapy