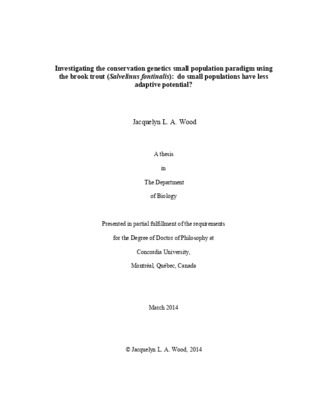 The conservation genetics small population paradigm predicts reduced quantitative genetic variation and consequently, adaptive potential, for populations which have become small and isolated due to habitat fragmentation. While these expectations are supported by laboratory studies, their generality in wild populations remain unresolved. In actuality, the evolutionary consequences of fragmentation may depend on whether environmental characteristics– and by extension, selective regimes are (1) shifted in a consistent directional manner as is widely assumed (Directional hypothesis), or (2) become more variable as population and fragment size decrease (Variable hypothesis); this latter possibility has so far received little empirical attention. Implementing field techniques, I explore these two competing hypotheses by relating variability in habitat characteristics to population size in a series of differentially abundant brook trout (Salvelinus fontinalis) populations located at Cape Race, Newfoundland. I furthermore use these hypotheses as a foundation to test the assumptions of the conservation genetic small population paradigm by investigating the relationships of population size at Cape Race to additive genetic variation (VA), trait differentiation (QST), and phenotypic plasticity in common garden analyses, and to the extent of natural selection in a meta-analysis using a large number of natural populations and species. Across two years and in relation to two population size metrics, patterns of habitat characteristics among small versus large Cape Race populations supported the Variable hypothesis. However, small brook trout populations did not significantly differ from large populations in either the magnitude or variability of VA, QST, or phenotypic plasticity. Results of the meta-analysis similarly revealed little support for differences in the strength, direction, and form of selection among wild populations differing in population size. The lack of differences might be explained by long term fluctuating environmental conditions which resulted in fluctuating selective pressures and similar outcomes among small compared to large Cape Race populations, and among the species included in the meta-analysis. Overall, the results of this research contradict the assumption that small populations generally inhabit marginal environments and also dispute the major tenets of the conservation genetics small population paradigm. Taken together, they suggest that even very small populations of some species may retain the adaptive potential necessary to cope with future environmental change