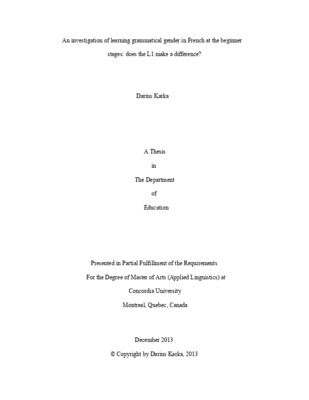 An investigation of learning grammatical gender in French at the beginner stages: does the L1 make a difference?

By Darius Karka
Get PDF (2 MB)

ABSTRACT An Investigation of Learning Grammatical Gender in French at the Beginner Stages: Does the L1 Make a Difference? Darius Karka Research has demonstrated that learning grammatical gender in French for English speakers is difficult (Lyster, 2004; Lyster & Izqueirdo, 2009), and does not easily progress from item learning to system learning (Bell & Collins, 2009; Harley, 1998). This is usually explained by the absence of grammatical gender in English, but research on the facilitative effects of L1 for gender are contradictory (Sabourin, Stowe, & Haan, 2006; White, Valenzuela, Kozlowska-MacGregor, & Leung, 2004) and have not examined the actual learning process in the initial stages. These issues are addressed by comparing the learning of two reliable noun ending cues for gender (-eau for masculine and –tion for feminine) in French by speakers whose L1 marks grammatical gender (Spanish) with those whose L1 does not (English). Beginner-level English (n=12) and Spanish (n=16) speakers were exposed to the noun endings via crossword puzzle and picture-matching activities. A pre-post-test design examined their ability to assign gender to both familiar and novel nouns, measured via a 3-choice preference task and a picture identification task. Post-task interviews probed learners’ awareness of the noun-ending cues for gender. Analyses of variance with Time and Performance on novel and familiar items as an indication of item vs. system learning revealed significant gains by both groups, particularly on the familiar items, but no differences between groups, nor did the groups differ in their awareness of noun-ending gender cues