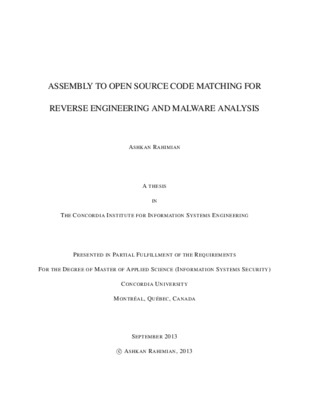 By Ashkan Rahimian
Get PDF (2 MB)

The process of software reverse engineering and malware analysis often comprise a combination of static and dynamic analyses. The successful outcome of each step is tightly coupled with the functionalities of the tools and skills of the reverse engineer. Even though automated tools are available for dynamic analysis, the static analysis process is a fastidious and time-consuming task as it requires manual work and strong expertise in assembly coding. In order to enhance and accelerate the reverse engineering process, we introduce a new dimension known as clone-based analysis. Recently, binary clone matching has been studied with a focus on detecting assembly (binary) clones. An alternative approach in clone analysis, which is studied in the present research, is concerned with assembly to source code matching. There are two major advantages in considering this extra dimension. The first advantage is to avoid dealing with low-level assembly code in situations where the corresponding high-level code is available. The other advantage is to prevent reverse engineering parts of the software that have been analyzed before. The clone-based analysis can be helpful in significantly reducing the required time and improving the accuracy of static analysis. In this research, we elaborate a framework for assembly to open-source code matching. Two types of analyses are provided by the framework, namely online and offline. The online analysis process triggers queries to online source code repositories based on extracted features from the functions at the assembly level. The result is the matched set of references to the open-source project files with similar features. Moreover, the offline analysis assigns functionality tags and provides in-depth information regarding the potential functionality of a portion of the assembly file. It reports on function stack frames, prototypes, arguments, variables, return values and low-level system calls. Besides, the offline analysis is based on a built-in dictionary of common user-level and kernel-level API functions that are used by malware to interact with the operating system. These functions are called for performing tasks such as file I/O, network communications, registry modification, and service manipulation. The offline analysis process has been expanded through an incremental learning mechanism which results in an improved detection of crypto-related functions in the disassembly. The other developed extension is a customized local code repository which performs automated source code parsing, feature extraction, and dataset generation for code matching. We apply the framework in several reverse engineering and malware analysis scenarios. Also, we show that the underlying tools and techniques are effective in providing additional insights into the functionality, inner workings, and components of the target binaries