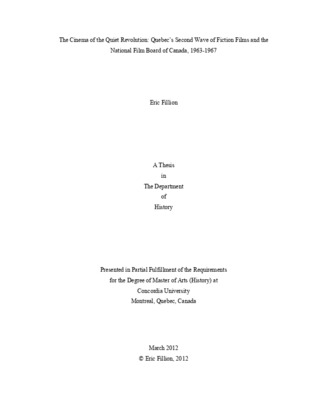 The Cinema of the Quiet Revolution: Quebec’s Second Wave of Fiction Films and the National Film Board of Canada, 1963-1967

By Eric Fillion
Get PDF (1 MB)

Film historians situate the birth of le cinéma québécois in the late 1950s with the emergence – within the National Film Board of Canada (NFB) – of an Équipe française whose Direct Cinema revolutionized documentary filmmaking. The grand narrative of Quebec national cinema emphasises the emancipating qualities of this cinematographic language and insists that it contributed to a collective prise de parole and Quebec’s ascension to modernity. Film historians mythologize the cinema of the Quiet Revolution (1958-1967) by inscribing the fiction films of the 1960s within the trajectory of Direct Cinema. Borrowing from Jocelyn Létourneau, the present thesis uses the concept of community of communication to investigate the documentary-to-fiction transition that accompanied the creation of the NFB’s Production française in the mid-1960s. The argument advanced here is that Quebec’s francophone filmmakers, between 1963 and 1967, distanced themselves from documentary filmmaking – including Direct Cinema – to explore the dramatic form and feature length format. They formed a tightly-knit community of communication whose actions, written works and films explained, legitimized and promoted the notion that Quebecers needed a commercial feature film industry of their own. The most prominent members of the Production française – Gilles Carle, Gilles Groulx and Arthur Lamothe to name but a few – played a preponderant role in this process. They articulated and disseminated an elaborate narrative which allowed them to consolidate their status as auteurs within a post-Duplessis Quebec. The present thesis reconstructs and analyzes the above filmmakers’ narrative to demythologize – and develop an alternative reading of – the cinema of the Quiet Revolution