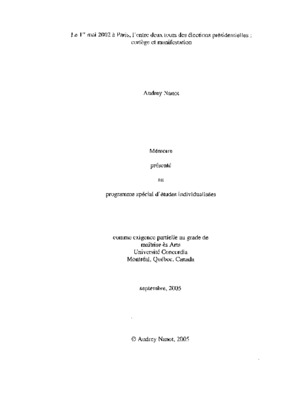 By Audrey Nanot
Get PDF (5 MB)

The 2002 French Presidential elections marked a turning point in the country's political history. Outgoing right-wing president Jacques Chirac was directly challenged in the second round of voting by Jean-Marie Le Pen, leader of Le Front national---France's extreme right-wing party. In response to what appeared to be a direct affront to the majority of the population, over 500,000 demonstrators took to the streets of Paris on May 1st, 2002. Earlier that day, 10,000 supporters of the Front national solemnly marched in their traditional parade, infused with a sense of a near victory. This thesis attempts to understand how, in which way, with which goals, and using which urban historical landmarks, two opposite political mass movements successively took over the streets of Paris. To this end, we have chosen a media corpus. Our first chapter presents the socio-political context, the definition of a procession and a demonstration, as well as the media corpus. The second chapter analyses the Frontist parade, its history, its carefully orchestrated urban staging and the journalistic portrayal of individuals that constitute its nationalistic expression. The third chapter presents the historical significance of May Day, the national and international solicitation to demonstrate, as well as the journalistic description of the day's festivities through the portrayal of the crowd, the music, and an analysis of the demonstrators' political slogans. Finally, the fourth chapter proposes an analysis of the ritualistic factors inherent within these two public gatherings. The purpose is to show how Paris's historical landmarks were manipulated by two different urban political movements, and how each group expressed their vision of France through the streets in which they chose to congregat