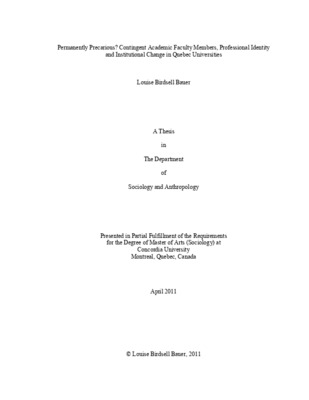 Universities across Canada are increasingly using contingent, or temporary instructors to teach undergraduate courses (Rajagopal 2002, Muzzin 2008, Lin 2006). Scholars have examined the marginalization of contingent academic faculty members in Canadian universities (Rajagopal 2002, Muzzin 2008). They have also critiqued the ways in which universities use contingent faculty to create surplus value and surplus labour (Rajagopal 2002, Bauder 2006), and support a “primary segment” (Bauder 2006) of the tenured and tenure-track professoriate. In this thesis, I examine the key issues faced by contingent academic faculty members, and how these issues impact on their professional identity. I also investigate into how the use of contingent faculty impacts on teaching practices in higher education. Through the analysis of Labour Force Survey data, I ascertain to what extent contingent academic labour has increased from 1998 to 2008, suggesting that full-time temporary labour is on the rise. I then analyze data gathered from twelve interviews with contingent academic faculty members at Quebec universities to explore how their working conditions and experiences have impacted on their professional identity and perceived quality of instruction. I suggest that professional identity among contingent faculty members is not as static as suggested by Rajagopal (2002) or Gappa and Leslie (1993) Using David Harvey’s (2005) concept of neoliberalism and Ulrich Beck’s (1992) concept of the flexibilization of labour under risk society, I situate the flexibilization of academic labour within the neoliberalization of the university, and also point to linkages between contingent academic labour and the commodification of higher education