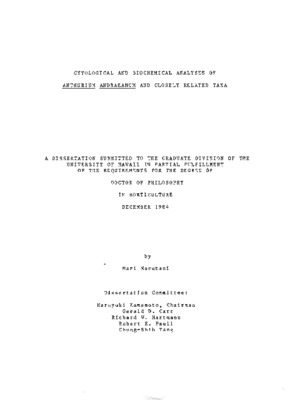 By Mari Marutani
Get PDF (3 MB)

Karyotypes and meiotic configurations of Anthurium andraeanum and closely related taxa were analyzed. The karyotypes of Anthurium species with the exception of A. nymphaeifol iutn and A. wallisii commonly consisted of four large metacentrlc or submetacentr1 c chromosomes, two fairly large acrocentric chromosomes, two satellite chromosomes and twenty two smaller chromosomes. A slight variation in the karyotypes of A. nymphaeifolium and A. wallisii suggested the presence of chromosomal rearrangement in the genus. All taxa showed 15 pairs of chromosomes at prometaphase I of melosis in pollen mother cells. Four large chromosomes formed two distinct ring blvalents and the rest of the chromosomes appeared as rings or rod blvalents. Cytological analysis of A. amnicola showed that the species exhibited a similar chromosome complement to that of A. andraeanum and closely related taxa. Hybrid analysis revealed close genomic relationships among the parental taxa. Regular bivalent formation was found at prometaphase I of melosis in pollen mother cells. However, reduction of pollen fertility estimated by pollen stainability in interspecific hybrids indicated genetic divergence of species. The genetic d1 st1 ct1 veness of two previously defined species groups (Sheffer and Kameraoto's groups V and VI) was indicated by virtual male sterility In Intergroup Interspecific hybrids. Anthurium amnicola showed its genetic closeness to species in group VI, Mean configurations at prometaphase I showed 15 blvalents In various hybrids of A. amnicola, and pollen fertility of those hybrids were very similar to that of Intragroup Interspecific hybrids (VI x VI). Several flavonoid compounds were characterized from leaves of Anthurium species. The major flavonoid from A. andraeanum was tentatively identified as acacetln C-glycoslde. Anthurlum formosum contained flavonols which were useful in assessing phylogenetic relationships of taxa. Co-pigmentation effects of those flavonols were also noticed. Anthurlum amnlcol a (A417) was found to contain acacetln 6-C-glycoside as the major compound while apigenin seemed to be the most common flavonoid in other species. Flavonold profiles revealed by HPLC chromatograms showed that each species displayed a specific flavonold pattern. Flavonold data could be used for species Identification. Numerical methods were applied to evaluate phenetlc and phylogenetic relationships among A. andraeanum and closely related taxa. The phenogram constructed on the basis of flavonold data Indicated that flavonold analysis aided in dividing morphologically similar taxa into subgroups. Cladlstlc analysis supported close relationships among the three taxa In Sheffer and Kamemoto's group V. Two anthocyanins were isolated and Identified from lavender spathes of A. amnicola. The major pigment was cyanidin 3-rutlnoslde and the minor pigment was Identified as peonidin 3-rutinoside. In the survey of anthocyanins in selected Anthurlum taxa and interspecific hybrids cyanldln 3-rutinoside appeared as the most common anthocyanln. Presence of pelargonidin In A. andraeanum and peonidin In A. amnicola as the important pigment Indicated the independent biochemical advancement from cyanidin in the two taxa. The biochemical studies on A. amnicola and its hybrids were conducted to Investigate factors responsible for their colors. The concentration of cyanidin 3-rutinoside, presence of co-pigment, and pH of tissues were found to be important in color determination of those plants