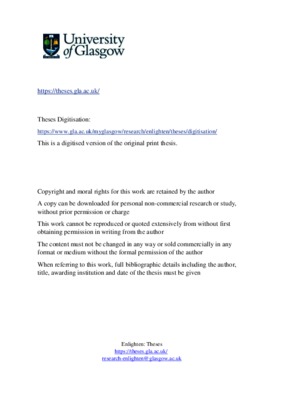 Biblical warrants for worship: An examination of the scriptural and early patristic basis for the major liturgical practices of the Church of Scotland

In this thesis the writer researches the following statement made by Dr. O.B. Milligan in the Preface to the Book of Common Order of the Church of Scotland: Further, the Church of Scotland, adhering to the Scottish Reformation and receiving "the Word of God which is contained in the Scriptures of the Old and New Testaments as its supreme rule of faith and life", bases all its wroship on Holy Scripture. Without reservation of any kind it may be asserted that everything contained in this Book receives its warrant from that source. In this study the writer shows the extent to which this forthright affirmation by Dr. Milligan can be supported by the evidence. While the debt to the Old Testament worship is not overlooked, the writer concentrates on the writings of the New Testament. Also he extends the scope of his investigation beyond the New Testament Canon. Inasmuch as the patristic literature down to Hippolytus reflects liturgical practices which extend back to the times when parts of the New Testament were written, the writer has included this additional evidence. Of necessity the writer has had to be selective in terms of the contents of the Book of Common Order. He has restricted himself to those Orders and parts of them which are related to regular public worship. Nevertheless, it will be clear to anyone who consults the Book of Common Order that any Orders which are not explicitly considered contain muchwith which the writer does deal. As a background for his study of the worship of the Church of Scotland, the writer outlines the service of the Synagogue at the time of Jesus; it was this worship which the Christian Church inherited and which the first Christians continued, to practise. Then, turning more specifically to the Book of Common Order, he discusses three elements of a general nature: Sunday; the Christian Year; and the Lectionary. The next chapter focuses attention upon features common to most services: Calls to Worship and Prayer; Psalms, Paraphrases, Hymns and Canticles; Scripture Readings; Creed; Prayers, including the Lord's Prayer; Congregational Responses; intimations; Sermon; Ascriptions; Offerings; and Benediction. A chapter is devoted to each of the two Sacraments - Baptism and the Lord's Supper - as well as to the rite of Confirmation. The writer draws the thesis to a close by stating his conclusions and making some general observations about the validity and truth of Milligan's statement. A Selected Bibliography follows the last chapter. Although Milligan's assertion cannot be completely substantiated, the writer demonstrates in this study the large extent to which it is true. Furthermore, it may be pointed out that many of the liturgical practices of the Church of Scotland are common to all branches of the Christian Church. Therefore, the results of this research have significance not only for the Church of Scotland but also for the v/hole of Christendom