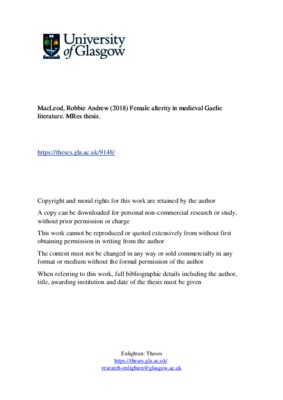 This study is a literary critical examination of two specific instances of the alterity of women in medieval Gaelic secular prose literature: that of the foreign woman, and that of the woman warrior. Within both is seen how women are treated as outsiders in much of our literature from the period, and some more so than others. Foreign women are discussed as alluring, as mothers, and as dangerous individuals (frequently abductees) who can destabilise the society into which they enter. The repeated failures of women warriors are examined, and their interactions with weaponry, space and gender, as well as how other markers of alterity, such as foreignness, impact upon the portrayals of woman warriors in the literature. Overall, it is argued that we can understand women in medieval Gaelic literature as outsiders in general, but in specific instances certain women are made so distinctly outside the norm that they can be read as deliberately alienated