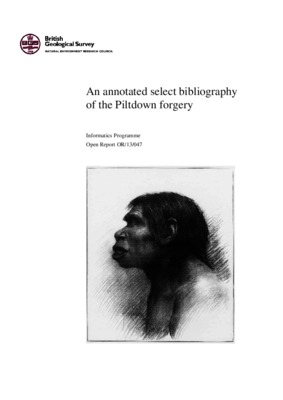 An annotated select bibliography of the Piltdown forgery

‘Ever since the Piltdown man was shown to be a hoax about half a century ago, science has been haunted by the spectre of fraud. By and large, most researchers have felt themselves part of an honourable tradition of being seekers after scientific objectivity. And examples of trickery and deceit have been few and far between. However, recent studies have shaken this view and challenged it as at best complacent, at worst misleading. The major scientific crimes of fabrication, falsification and plagiarism may be only the tip of the iceberg and there is evidence of a much wider and deeper problem, not of outright fabrication of results but of distortion, omission and exaggeration.’ So wrote Stephanie de Bono in an article for the Telegraph published in 2005. This criticism was aimed primarily at the biomedical profession, but her warning could have been applied with varying degrees of justification to almost any scientific discipline. Furthermore, the often-made claim that scientific research proceeds in a rational way has been shown to be a myth. Thus, ‘Expectancy leads to self-deception, and self-deception leads to the propensity to be deceived by others. The great scientific hoaxes, such as the Beringer case and the Piltdown man...demonstrate the extremes of gullibility to which some scientists may be led by their desire to believe’ (Broad & Wade 1982; for Beringer see Jahn & Woolf 1963). Perhaps then, there are still lessons to be learned from Piltdown. Yet the lessons are not confined only to a proper understanding of the circumstances of the forgery and its ability to remain undetected for forty years! Since 1953, when the fraud was first exposed, we have seen the development of an entertaining but unworthy ‘whodunit’ industry, in which almost anyone with a link to Piltdown has been considered a suspect. The evidence put forward in these cases is often circumstantial and sometimes flimsy in the extreme. The arguments frequently demonstrate poor judgement, personal bias and a tendency toward tunnel vision on the part of investigators. Little wonder that some commentators have expressed exasperation at the whole messy business (e.g. Bowler 1987, Chippindale 1990). The list of suspects implicated in the Piltdown forgery has been said to number twenty-seven (Henderson 2003), although to the compiler’s knowledge no comprehensive list has yet been published. Turrittin (2006) examines sixteen of those directly accused. The following names, here given in alphabetical order, have been tainted by accusation, in some cases supported by detailed arguments, in others noted in passing, and in a few instances put forward presumably in jest (in the last category may probably be included two ‘confessions’). These are: W. J. Lewis Abbott, Frank O. Barlow, W. R. Butterfield, C. P. Chatwin, Chipper the goose, Horace de Vere Cole, Charles Dawson, Arthur Conan Doyle, W. L. H. Duckworth, F. A. Hampton, Venus Hargreaves, John T. Hewitt, Martin A. C. Hinton, Arthur Keith, A. S. Kennard, Robert Kenward (and the young Kenwards), John Lewis, R. A. Marriott, Harry Morris, Félix Pelletier, Grafton Elliot Smith, W. J. Sollas, Pierre Teilhard de Chardin, Samuel Woodhead and Arthur Smith Woodward. Entries under each of these names will be found in the bibliography. It is the view of this compiler that the Piltdown forgery owed its early success to the grandiose ambitions of four rather self-important men, each in search of fame and academic recognition, but only one of whom was the actual forger. All, however, feature among the list of the accused. The present bibliography, selective as it is, contains some 1190 citations―a remarkable testimony to the legacy of Piltdown, a legacy moreover that shows no sign of diminution. Herein will be found a cabinet of curiosities, from the sensible to the absurd, from ethical science to creationism, from wine to weird fiction