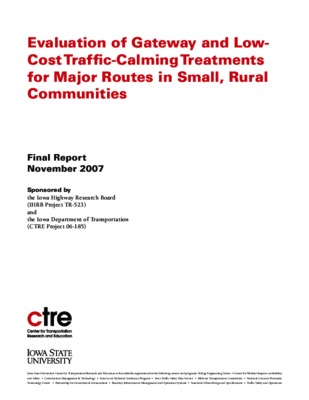 Many rural communities have developed around highways or major county roads; as a result, the main street through small rural communities is often part of a high-speed rural highway. Highways and county roads are characterized by high speeds outside the city limits; they then transition into a reduced speed section through the rural community. Consequently, drivers passing through the community often enter at high speeds and maintain those speeds as they travel through the community. Traffic calming in small rural communities along major roadways is common in Europe, but the U.S. does not have experience with applying traffic-calming measures outside of major urban areas. The purpose of the project was to evaluate traffic-calming treatments on the major road through small Iowa communities using either single-measure low-cost or gateway treatments. The project was partially funded by the Iowa Highway Research Board (IHRB). The focus of the IHRB portion was to evaluate single-measure, low-cost, traffic-calming measures that are appropriate to major roads through small rural communities. Seven different low-cost traffic treatments were implemented and evaluated in five rural Iowa communities. The research evaluated the use of two gateway treatments in Union and Roland; five single-measure treatments (speed table, on-pavement “SLOW” markings, a driver speed feedback sign, tubular markers, and on-pavement entrance treatments) were evaluated in Gilbert, Slater, and Dexter