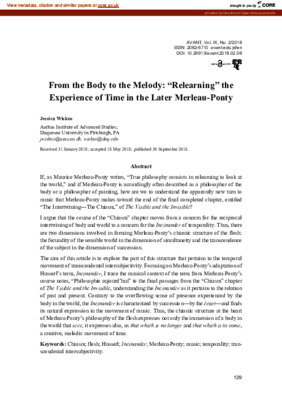 From the Body to the Melody: “Relearning” the Experience of Time in the Later Merleau-Ponty

If, as Maurice Merleau-Ponty writes, “True philosophy consists in relearning to look at the world,” and if Merleau-Ponty is accordingly often described as a philosopher of the body or a philosopher of painting, how are we to understand the apparently new turn to music that Merleau Ponty makes toward the end of the final completed chapter, entitled “The Intertwining—The Chiasm,” of The Visible and the Invisible? I argue that the course of the “Chiasm” chapter moves from a concern for the reciprocal intertwining of body and world to a concern for the Ineinander of temporality. Thus, there are two dimensions involved in forming Merleau-Ponty’s chiastic structure of the flesh: the fecundity of the sensible world in the dimension of simultaneity and the transcendence of the subject in the dimension of succession. The aim of this article is to explore the part of this structure that pertains to the temporal movement of transcendental intersubjectivity. Focusing on Merleau-Ponty’s adaptation of Husserl’s term, Ineinander, I trace the musical context of the term from Merleau-Ponty’s course notes, “Philosophie aujourd’hui” to the final passages from the “Chiasm” chapter of The Visible and the Invisible, understanding the Ineinander as it pertains to the relation of past and present. Contrary to the overflowing sense of presence experienced by the body in the world, the Ineinander is characterized by succession—by the écart—and finds its natural expression in the movement of music. Thus, the chiastic structure at the heart of Merleau-Ponty’s philosophy of the flesh expresses not only the immersion of a body in the world that sees; it expresses also, as that which is no longer and that which is to come, a creative, melodic movement of time