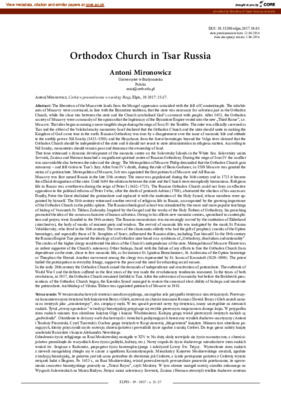 The liberation of the Muscovite lands from the Mongol oppression coincided with the fall of Constantinople. The inhabitants of Muscovy were convinced, in line with the Byzantine tradition, that the state was necessary for salvation just as the Orthodox Church, while the close ties between the state and the Church symbolised God’s covenant with people. After 1453, the Orthodox society of Muscovy were commonly of the opinion that the legitimacy of the Byzantine Empire vested into the new „Third Rome”, i.e. Moscow. That idea began assuming a more tangible shape during the reign of Ivan IV the Terrible. The ruler was officially crowned as Tsar and the abbot of the Volokolamsky monastery Josef declared that the Orthodox Church and the state should unite in making the Kingdom of God come true in the earth. Russian Orthodoxy was torn by a disagreement over the issue of monastic life and attitude to the earthly power. Nil Sorsky (1433–1508) and the Hesychasts from the forest hermitages beyond the Volga river claimed that the Orthodox Church should be independent of the state and it should not resort to state administration in religious matters. According to Nil Sorsky, monasteries should remain poor and denounce the ownership of land. That time witnessed a dynamic development of the monastic centre on the Solovetsky Islands in the White Sea. Solovetsky saints Savvatii, Zosima and Herman launched a magnificent spiritual centre of Russian Orthodoxy. During the reign of Ivan IV the conflict was unavoidable also between the ruler and the clergy. The Metropolitan of Moscow Philip demanded that the Orthodox Church gain autonomy – and fell victim to Tsar’s fury. After Ivan IV’s death, during the rule of Boris Godunov, in 1589 Moscow was granted the status of a patriarchate. Metropolitan of Moscow, Job was appointed the first patriarch of Moscow and All Russia. Muscovy was first named Russia in the late 15th century. The name was popularised during the 16th century and in 1721 it became the official designation of the state. Until 1694 the relations between the state and the Church were exemplarily harmonious. Religious life in Russia was overthrown during the reign of Peter I (1682–1725). The Russian Orthodox Church could not form an effective opposition to the political reforms of Peter I who, after the death of patriarch Adrian (1700), obstructed the election of his successor. Finally, Peter the Great abolished the patriarchate and replaced it with the institution of the Holy Synod, whose members were appointed by himself. The 18th century witnessed another revival of religious life in Russia, accompanied by the growing importance of the Orthodox Church in the public sphere. The Russian theological school was stimulated by the more and more popular teachings of bishop of Voronezh St. Tikhon Zadonsky. Inspired by the Gospel and the works of the Holy Fathers of Orthodoxy, his preaching promoted the idea of the common character of human salvation. Owing to his efforts new monastic centres, specialised in contemplation and prayer, were founded in the 19th century. The Russian monasticism was increasingly moved by the institution of Elderhood (starchestvo), the body of monks of eminent piety and wisdom. The revival of monastic life was instigated by the monk St. Paisius Velichkovsky, who lived in the 18th century. The views of the charismatic elderly who had the gift of prophecy (monks of the Optina hermitage), and especially those of St. Seraphim of Sarov, influenced the Russian elites, including Tsar himself. In the 19th century the Russian Empire Tsar promoted the ideology of an Orthodox state based on a symbiosis of „Orthodoxy, absolutism and nationality”. The circles of the higher clergy recultivated the ideas of the Church’s independence of the state. Metropolitan of Moscow Filaret was an ardent supporter of the Church’s autonomy. Other bishops, faced with the failure of any efforts to free the Orthodox Church from dependence on the state, chose to live monastic life, as for instance St. Ignatius Branchaninov, St. Ambrosius of the Optina hermitage or Theophan the Hermit. Another movement among the clergy was represented by St. Ioann of Kronstadt (1829–1909). The priest hailed the participation in everyday liturgy, support to the poor and the need for educating social masses. In the early 20th century the Orthodox Church raised the demands of independence and reactivation of patriarchate. The outbreak of World War I and the defeats suffered in the first years of the war made the revolutionary tendencies imminent. In the times of both revolutions, in 1917, the Orthodox Church remained faithful to Tsar. After the subversion of monarchy but before the Bolshevik prosecutions of the Orthodox Church began, the Kremlin Synod managed to restore the canonical elect ability of bishops and reactivate the patriarchate. Archbishop of Vilnius Tikhon was appointed patriarch of Moscow in 1918