Purpose - Understanding farmers’ perceptions of how the climate is changing is vital to anticipating its impacts. Farmers are known to take appropriate steps to adapt only when they perceive change to be taking place. This study aims to analyse how African indigenous vegetable (AIV) farmers perceive climate change in three different agro-climatic zones (ACZs) in Kenya, identify the main differences in historical seasonal and annual rainfall and temperature trends between the zones, discuss differences in farmers’ perceptions and historical trends and analyse the impact of these perceived changes and trends on yields, weeds, pests and disease infestation of AIVs. Design/methodology/approach - Data collection was undertaken in focus group discussions (FGD) (N = 211) and during interviews with individual farmers (N = 269). The Mann–Kendall test and regression were applied for trend analysis of time series data (1980-2014). Analysis of variance and least significant difference were used to test for differences in mean rainfall data, while a chi-square test examined the association between farmer perceptions and ACZs. Coefficient of variation expressed as a percentage was used to show variability in mean annual and seasonal rainfall between the zones. Findings - Farmers perceived that higher temperatures, decreased rainfall, late onset and early retreat of rain, erratic rainfall patterns and frequent dry spells were increasing the incidences of droughts and floods. The chi-square results showed a significant relationship between some of these perceptions and ACZs. Meteorological data provided some evidence to support farmers’ perceptions of changing rainfall. No trend was detected in mean annual rainfall, but a significant increase was recorded in the semi-humid zone. A decreasing maximum temperature was noted in the semi-humid zone, but otherwise, an overall increase was detected. There were highly significant differences in mean annual rainfall between the zones. Farmers perceived reduced yields and changes in pest infestation and diseases in some AIVs to be prevalent in the dry season. This study’s findings provide a basis for local and timely institutional changes, which could certainly help in reducing the adverse effects of climate change. Originality/value - This is an original research paper and the historical trends, farmers’ perceptions and effects of climate change on AIV production documented in this paper may also be representative of other ACZs in Kenya 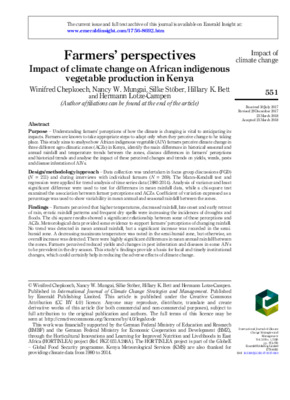