Purpose - The Sertão, located in the Northeastern region of Brazil, is the most populous semi-arid region in the world. The region also faces the highest rates of poverty, food insecurity and climate risks in this country. Basic economic activities, such as extensive livestock and dairy farming, tend to be mainly affected by the increasing temperatures and recurrent droughts taking place in the past decades. This paper aims to analyze farmers’ responses to climatic variability in the Sertão Design/methodology/approach - Analyses are based on farm-level data of the Agricultural Census 2006 and on historical climate data gathered by meteorological stations. The climate impacts and the effectiveness of adaptive strategies are compared between three groups of farms, which discriminate different levels of social and environmental vulnerability. Four production functions are modeled (milk, cattle, goat and sheep) accounting for sample selectivity bias. Findings - In response to increasing temperatures, farmers tend to shift their activities mainly to cattle and dairy farming. But the overall productivity tends to reduce with the recurrence of droughts. Decreasing precipitation affects mainly the production of milk of smallholder family farmers and the cattle herd of non-family farmers. Research limitations/implications - Analyses do not account for short- and medium-run productive impacts of extreme droughts, which usually have devastating socioeconomic effects in the region. Originality/value - Smallholder family farmers are the most vulnerable group who deserve more social and technical intervention, as they lack basic social and technological resources that can greatly improve their productivities and overcome the impacts of decreasing precipitation 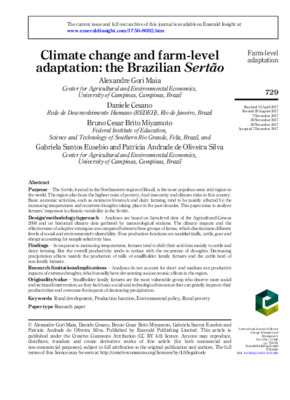