POSS (polyhedral oligomeric silsesquioxanes) nanotechnology was applied for preparation of efficient Ni catalysts for hydrogen production through autothermal reforming of methane (ATR of CH4). The novel metal-POSS precursor [Nickel (II) ‒ Heptaisobutyl POSS (C4H9)7Si7O9(OH)O2Ni] of Ni nanoparticles was introduced into Ce0.5Zr0.5O2 support with following calcination and reduction stages of activation. The peculiarity of the genesis of Ni/SiO2/Ce0.5Zr0.5O2 nanomaterials and their characteristics versus deposition mode were studied by X-ray fluorescence spectroscopy, thermal analysis, N2 adsorption, X-ray diffraction, high-resolution transmission electron microscopy and H2 temperature-programmed reduction. The two kinds of supported Ni-containing particles were observed: highly dispersed Ni forms (1‒2 nm) and large Ni-containing particles (up to 50‒100 nm in size). It was demonstrated that the textural, structural, red-ox and, consequently, catalytic properties of ex-Ni-POSS catalysts depend on the deposition mode. The increase of a portion of difficultly reduced Ni2+ species is found upon application of intermediate calcination during Ni-POSS deposition that has detrimental effect on the activity of catalyst in ATR of CH4. The Ni/SiO2/Ce0.5Zr0.5O2 catalyst prepared by one-step Ni-POSS deposition exhibits the highest H2 yield ‒ 80% at T = 800 °C 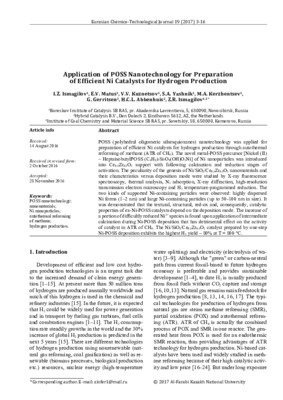