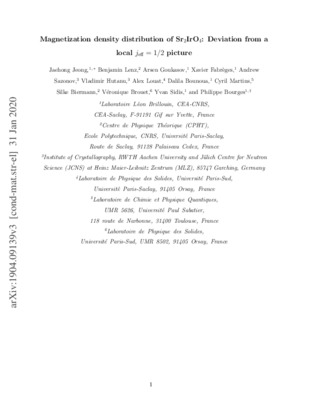 $5d$ iridium oxides are of huge interest due to the potential for new quantum states driven by strong spin-orbit coupling. The strontium iridate Sr$_2$IrO$_4$ is particularly in the spotlight because of the so-called $j_\text{eff}=1/2$ state consisting of a quantum superposition of the three local $t_{2g}$ orbitals with -- in its most simple version -- nearly equal population, which stabilizes an unconventional Mott insulating state. Here, we report an anisotropic and aspherical magnetization density distribution measured by polarized neutron diffraction in a magnetic field up to 5~T at 4~K, which strongly deviates from a local \jeffHalf picture even when distortion-induced deviations from the equal weights of the orbital populations are taken into account. Once reconstructed by the maximum entropy method and multipole expansion model refinement, the magnetization density shows cross-shaped positive four lobes along the crystallographic tetragonal axes with a large spatial extent, showing that the $xy$ orbital contribution is dominant. The analogy to the superconducting copper oxide systems might then be weaker than commonly thought.Comment: 3 figures + supplementary file include